The copelandia (panaeolus) bisporus mushroom is another highly active mushroom that grows in nature in well manured soil or lawns. This species does not grow directly out of the dung, but rather in dung enriched soils on farms or pastures. As well this mushroom has been documented growing in lawns well fertilized with cattle manure.

In nature this species has been discovered in Central West Africa, Hawaii, Florida, Mexico and some south American countries. As well as one unusual sighting in Bern Switzerland where a whole lawn was covered with this psychedelic mushroom after being fertilized with some manure purchased from the south of France along the Mediterranean Sea. If this warm tropical mushroom can cover a lawn in Switzerland then chances are it can grow in well manured lawns in many place of the world if properly introduced.

Macroscopically the copelandia bisporus is similar to the copelandia cambodginiensis, tropicalis and cyanescens except it can be differentiated with a microscope by it’s two spored basidia.The panaeolus bisporus also has a more tan, brownish color to them as opposed to the whitish color mushroom of other copelandia mushrooms. As well the bisporus mushroom sometimes produce a ring around the cap. Also the mycelium is thin and wispy with a slight grayish color which is typical of the copelandia species. You can read more about the panaeolus (copelandia) genera of mushrooms here.

Our Austrian grower has worked with every species and strain panaeolus (copelandia) mushrooms and has great things to say about the copelandia bisporus. Of all the current available varieties he has grown the bisporus is his favorite. Our growers comment was: The panaeolus bisporus is THE best panaeolus I've seen. I like it’s color and fruit bodies have that forest vibe. A truly unique species.”

The history of this species, a forager from San Diego named Lipa found the original specimens in his manured garden.  Lipa noted this species does very well in the garden along with horse manure and noted it especially like to fruit near the stalks of plants, particular tomato plants. Once the soil drops below 45F the mycelium would die as this is a warm weather species. We have posted 2 pictures of the original copelandia bisporus Lipa found in his garden. It’s nice to read this is a great  mushroom for the garden and lawns! 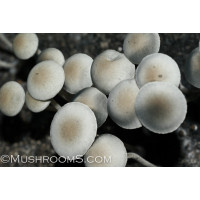 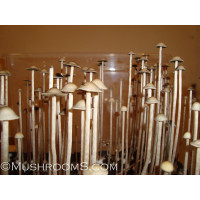