The Panaeolus Cambodginiensis was absent from the mushroom community for many years until mycologist John Allen found some specimens in Cambodia. It wasn't to long after, this great strain from Thailand surfaced. And now another new strain called Sandose. The Sandose spores tend to be more stable then the Goliath strain and easier to view. The Panaeolus Cambodginiensis is macroscopically identical to the panaeolus bispora and grows in the same conditions as the other panaeolus mushrooms. In nature they grow in grassy pastures on the dung of water buffalo, cattle and horses in tropical and subtropical climates. Although they have been reported in other climates as well. This species is thought to be spread through SE Asia subtropics and was reported by John Allen from the island of O'ahu Hawaii in 1993. This species is also found in Florida and Mexico.

The panaeolus species also shows up in some books as copelandia instead of Panaeolus name. Copelandia refers to panaeolus from tropical regions. This species is an excellent choice for ranches and farmlands as it's a quick dung decomposer. The fungi can break the dung down into rich composted soil, which feeds the grass that the livestock grazes on. The spores are deposited on the grass, which is then eaten by the livestock and deposited around the farm and fungi life cycle continues. Many ranchers have noted the dung smell is reduced when this fungi is present on the land.

The most well known medicinal value of these mushrooms is their ability to heal migraine headaches quickly. 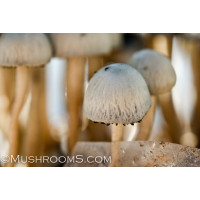 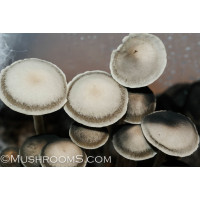 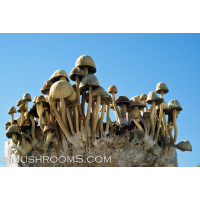