This strain of panaeolus cyanescens is a new hybrid that comes from a cross between the panaeolus cyanscens of the tropical region of Mexico in the Gulf of Mexico known as Hausteca. That mushroom was crossed with panaeolus cyanescens from Australia. These 2 were designed using snake venom ;) Both of those pan cyans were featured here on mushrooms.com. The original pan Hausteca spores mutated purple while developing good spore producing genetics, and our friend Jake worked hard to isolate those genetic phenotypes. They continued to get darker and darker with each isolation until they finally turned purple. This purple mutation was then crossed with Pan Cyan Australia because the Australia strain has a gold hue to them while the Hausteaca mushrooms are pure white. The purple spores with gold caps that this pan cyan produces confirms the traits from both species hybridization, creating a beautiful new specimen, and unique new spores as well. This strain is also referred to as PHV for short.

If you live in a country where it's legal to grow these mushrooms, this particular strain of panaeolus cyanescens is an aggressive strain when grown properly and can produce nice canopies of extremely potent mushrooms. Typically pan cyans are 3X more potent than cubensis.

If you live in a country where it’s legal to grow psilocybe mushrooms and you would like to learn more how to grow panaeolus cyanescens or other psilocybin containing panaeolus mushrooms, check out Jakes panaeolus grow guide posted here. 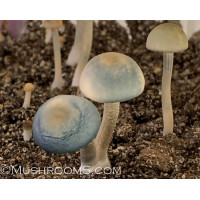 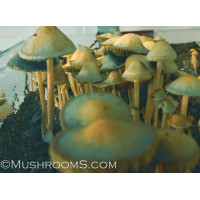 This wonderful strain of Panaeolus Cyanescens was discovered along the Peace River in Florida. Live..