Mushrooms.com is one of only a few spore vendors that carry the original true AUTHENTIC Penis Envy mushroom spores! The reason this strain of cubensis mushroom spores is so difficult to find is because less then %5 of the mushrooms drop spores. The Penis Envy mushroom is a mutant mushroom in a sense. It’s old and unstable, none the less this is one of the greatest cubensis spores available and has a huge following of fans on the net. We have found many web sites with entire forums devoted to this one strain of cubensis, it’s that popular!

The Penis Envy mushroom was originally rumored to be engineered by the famous entheogenic mycologist/enthobotanist Terence McKenna, God bless his resting spirit. For those not familiar with Terence McKenna he was a famous author, speaker, mycologist, botanist on psychoactive plants and fungi and he does have many good books out including my one of my favorite "Food of the Gods." Unfortunately Terence McKenna died years ago of a brain tumor and now resides in Gods hands.

A few years ago a writer doing a story was tracking down the history on the Penis Envy Cubensis because it's so unique, and has such a huge following on the internet. Through this writers persistence it was discovered that Terrance McKenna did not engineer this unique cubensis.

RG gave us some pictures from an old DVD from the late 90's when RG first produced the Penis Envy spores. On this DVD was all the original grows of this strain from the original founder RG and these are some cool pictures of gigantic Penis Envy cubes. These are the grandparents of the Penis Envy spores as we know it today. These old school pictures are from the original founder of this mutant strain from the late 90's and they were taken on an old video camera. The grandparents produced monster size mushrooms as this strain still does decades later. However the Penis Envy cubensis are a little more stubborn then other cubensis. Our Austrian friends say they don't get huge flushes from it, but what they do get are extremely big solid mushrooms that are the thickest cubensis mushrooms every seen. Cubensis stems are hollow inside, but the Penis Envy are dense with flesh, full of shroomy goodness. This cubensis hardly drops any spores. Because spores are so hard to obtain from this mushroom we have no choice but to raise the price for this cubensis but the reward is immense for this mushroom. Also to note, these are the only cubensis spore syringes we sell that are "light" on spores as only 5% of the mushrooms actually drop spores.  You will not receive our signature spore clouded cubensis syringes with this strain since spores are so difficult to collect. Because spores are so hard to obtain from this strain we do run out of stock regularly on this one. But usually for not more then a week or two at a time. As well germination of spores is slow for this strain. Cubensis spores normally germinate in 3 days but its not uncommon to see the Penis Envy spores take 7 to 10 days for germination to occur. It can also take about 3 weeks to completely fill a petri dish. So yes the Penis Envy is a slow colonizing strain but the end result is why this cubensis has such a huge following. Be sure not to write this strain off as dead spores unless you have given it at least 3 to 4 weeks under a microscope. As long as you have a little patience, this is a great strain of cubensis spores for anyones collection.

This listing is for a Penis Envy spore SWAB, not a spore syringe or spore print. A swab is a sterile q-tip that is rubbed under the gills to be coated in spores. This can be used under a microscope or streaked across agar. Since the Penis Envy drops so few spores we don't sell spore prints, only spore syringes. We decided to offer this spore swab so our international customers can order this strain too. Currently there is 2 spore swabs per order.

The Penis Envy has been the envy of many lab tech’s to cross this cubensis with other cubensis to create new hybrids. We carry one of the best hybrids called the Texas-PE6 which is a cross between the Texas Cubensis and the Penis Envy cubensis.

Did we mention it is above average potency for a cubensis as well.  The cows we interviewed claimed it was about 1.5X more potent then the cubensis they normally eat growing in the pastures. ;) So back to the penis thing. Well yeah this mushroom is shaped like a penis more so then other shrooms but the ladies love it. Sorry guys get over the name and enjoy it, this is one of the most unique cubensis of the 21st century!

Starting October 14th, 2 PE swabs will be included for the list price of $23. This can also be included in our multi spore discount to get another 25% off when purchasing at least 4 mushroom spore items. 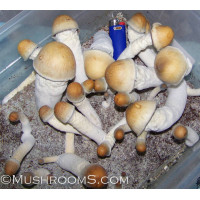