Both of the Brazilian cubensis mushroom spores we carry are top shelf, but the Corumba is our growers in Austria's top pick! In fact our grower thinks the Corumba cubensis is in the top 3 best cubensis. This is a fast and aggressive strain that produces heavily and has thick stems usually. Personally I like the patterns of lines in the caps too. It's also a heavy spore producer. The Corumba Brazil shrooms don't require much effort to speak to you......enjoy!

Click on the SPECIFICATION tab to learn more about the microscopic spore features. 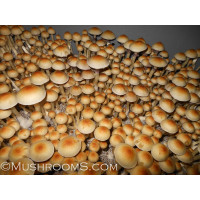