The Red Boy cubensis spores is a new addition to muShrooms.com released during Passover of 2020. Our master grower JakeonCid convinced us this cubensis strain was worthy of being a permanent addition to our spore catalog. The Red Boy cubensis has some unique characteristics setting it apart from other cubensis shrooms in that it drops a different color spores. Some times they are black, some times rust to gold. It also produces myco hats occasionally. The caps tend to have a reddish color variant at times, thus the name Red Boy. The Red Boy magic mushrooms are also considered above average potency for cubensis, according to JakeonCid’s cows. Cows usually know best so that is the word on the farm this week. Although the Red Boy does not produce big mushrooms, this strain usually produces full pin sets and gets full trays 90% of the time.  The Red Boy is also a fast strain which helps it resist contamination making it good for beginning researchers of spores. It's a good all around consistent strain of cubensis that is easy to work with and faithful too fruit. If you decide to adopt a Red Boy, let us know what you think of this strain.

Please note, the first initial spore syringes made by JakeonCid are using a spore syringe that has a weak plunger and may break during shipping if the post office handles it roughly. It does not affect the integrity of the spore solution. The plunger can be glued back on or still used creatively. We will not replace it if it breaks during shipping, unless the actual spore syringe cracks and leaks. If you're not ok with this, don't order it and wait for the new batches coming soon with our usual BD syringes. We are offering these first few batches at $2 off  because of this, then prices will go up as all the new batches will use our usual high quality BD brand of syringes. These also have a heavy spore load in them to make up for the sub par syringe used.

More syringes will be in stock in late January. :) 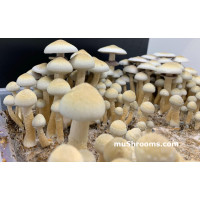 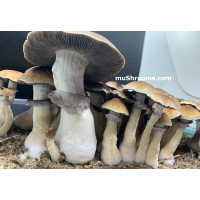