Psilocybe Cyanescens is the sister species to the psilocybe azurescens and is also native to the Pacific NW USA and is now spread through many countries in Europe. It's a cold weather wood loving species and thrives in the Seattle area due the alder mulch used in landscaping. The Psilocybe Cyanescens does not just thrive in Washington state though, as so many mushroom pickers have spread the spores along the western states and Canada. This species has really adapted to change and tends to be one of the most popular species of psilocybin mushrooms to find in Oregon and Washington. In Paul Stamet’s book "Psilocybe Mushrooms of the World", Paul points out how so many mushroom pickers were being arrested for trespassing in the 70's and the people were carriers for spores to the police station and courthouses. Paul writes this area became one is his favorite areas for picking Psilocybe Cyanescens mushrooms! How ironic and funny.

I once took a mushroom hunting vacation to Seattle to visit John Allen and he gave me the city tour to find and identify magic mushrooms native to the state of Washing for that time of year. We found quite a few different magic mushroom species but the ps. cyanescens were pretty much everywhere we searched and just confirmed that this species of psilocybe's thrives and grows quite easily. And almost everywhere we found the cyanescens we also found the deadly galerina mushrooms next to them. Although they are easy to tell apart, they do look similar and can easily be confused by someone uneducated and to excited to pick shrooms.

The cyanescen magic mushrooms are highly active and in this authors opinion is one of the most potent mushrooms I've ever experienced. I found them to be stronger and more intense then the azurescens and those are considered the most potent in the world.

This cool weather mushroom thrives in sawdust and small wood chips of fast decomposing hardwoods. In the Pacific NW USA it’s quite commonly found on alder mulch. This cool weather mushroom grows in temperature ranges around 55-70F. Even for spores to germinate, the temps need to be down around the 45F-55F range to start the life cycle in nature. However spawn runs have been noted as high as 75F but spore germination and fruiting temperatures are always much lower. This is typical of ALL wood loving cool weather psilocybe mushrooms. Spore prints of this species are collected from wild mushrooms and this author is not aware of anyone ever cultivating this species indoors. Current spore prints should be hydrated for 12 to 24 hours with sterile water first.

The psilocybe cyanescens are very powerful medicine and command respect and caution. How ever they are quite beautiful with their wavy caps dancing in the air calling out for attention. It's also quite interesting this species thrives in mulched landscapes in urban areas where people live. You could say it's a social mushroom.

we have these limited to 2 per customer for now. 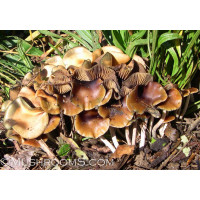