In nature the mexicana var. tampanensis grows in well manured pastures but never directly on the dung. Typically found in horse or cattle pastures among grass. It’s usually found in temperature ranges from 65F to 80F in sub tropical climates. Spores will germinate at the lower temperature range. The original first tampanensis mushrooms were thought to be there own species until recent DNA analysis by mushroom taxonomy expert Dr. Guzman determined the tampanensis is actually a variety of ps. mexicana.

They are named after Tampa Florida as they were found close to this city. Good strains of this mexicana variety eluded the online community for years as this variety is more rare in nature, but we now have this very reliable spores to enjoy!

Psilocybe Mexicana var. tampanensis is one of the rare mushrooms that produce sclerotia also referred to as “magic truffles” or “philosopher stones”. The sclerotia are small nuggets that grow under the soil and is a survival mechanism for the fungi. If conditions get bad and the surrounding mycelia network gets damaged or dies, the sclerotia lies dormant for the conditions to be favorable again and then sends out new mycelium from the sclerotia to continue the organisms life cycle.  In 2008 the Netherlands banned psilocybin mushrooms in the famous coffee shops, but not the magic truffles. These magic truffles are still shipped throughout Europe legally and grow kits are sold openly.

An interesting fact about fungi sclerotia from the handful of fungi species that produce them is they can be used very easily to start a new colony of mycelium. Morel mushrooms also produce sclerotia and this is a great way to get a patch of delicious morels going.

The Mexicana Tampanensis is on sale until January 3rd 2021 :) 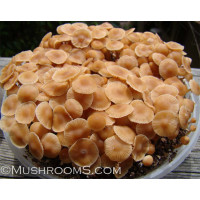 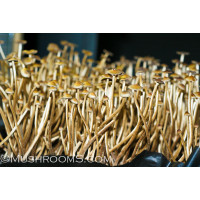 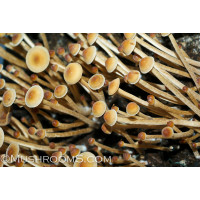