Psilocybe Ovoideocystidiata is a common mushroom that thrives in the USA cooler climate regions from the east coast to the west coast but has not been reported much in southern states. Although it was reported in Atlanta Georgia as well. This species has been reported in many cool weather countries of Europe as well.

Psilocybe Ovoideocystidiata has such a long name that most people just refer to them as “Ovoids”. People have also been collecting this species and referring to it as "bluefoots" (Ps. caerulipes) until properly classified in 2003. This species is actually quite pretty to observe in nature as it’s a highly active mushroom and stains blue very deep up maturing. I’ve seen some beautiful photos of this species turning a deep blue and having an almost greenish tint to it at times. The ovoids are a wood lover and the mycelium has been observed just ripping through wood chips as this species thrives to survive and spread it’s spores. Although this is a cool weather species, it normally does it’s best fruiting in the spring, with smaller flushes in the fall. Most highly active, cool weather, wood loving psilocybe mushrooms only fruit in the fall months, so this mushroom is an exception and also probably a good reason it has been reported in so many places around the world. This species tolerates warmer temperatures as opposed to most psilocybe wood loving species that prefer cold weather only. Also to note the spores from this species are rust in color where most psilocybe wood lovers are dark purple to dark brown.

I’ve seen a lot of photos of Psilocybe Ovoideocystidiata over the years and I have to say this one is quite the shape shifter.  One other important point to mention as most observers of this species in nature all say when they see patches the mushrooms are in BIG numbers, sometimes thousands of them.

If you would like to see more photos of this species visit www.mushroomobserver.org and type and copy/paste Ovoideocystidiata into the search field. 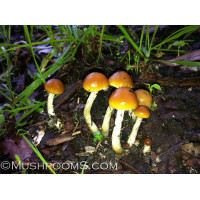 The psilocybe Subaeruginosa is native to Australia and New Zealand and we were finally blessed with ..