Another original psilocybe mushroom strain of spores brought to you by The Hawks Eye / Mushrooms.com. Along my many travels searching for new mushroom spores, one of my favorite places I have visited is the charming island of Roatan. Roatan is part of the Bay Islands, off the coast of Honduras. This island and its people are very close to my heart and I can't wait to visit Roatan again.  It's a beautiful, tropical Caribbean Island with world class scuba diving, delicious cuisine and tropical restaurants, clean and beautiful beaches with clear warm water, great night life, and plenty of mushrooms growing wild. The West End and West Bay area are very charming and many Europeans and Americans call this area home. There is about a 1.5 mile stretch of beach along the West End and West Bay area where most of these people live, work and play. It's not commercialized and by the end of the week you have made many friends from walking up and down the main road and eating at open air restaurants along the beaches. The best way to describe Roatan is it’s charming and intimate!

If you’re a scuba diver, I highly recommend spending a week or more here diving. The diving is some of the best in the Caribbean and it's really inexpensive. It has some very unique diving experiences there as well. At Anthoney’s Keys Resort they have the dolphins trained to follow the scuba diving boats out to see and the dolphins will play with you while you dive. Also on Roatan is one of the coolest shark feeding dives I've ever done. Lots of beautiful corals with a healthy reef system and easy, relaxing diving! Great snorkeling too!

I did manage to break away from the scuba diving and do some mushroom hunting. Although both times I visited Roatan, I was there during the non rainy season, so the mushrooms were not abundant at this time. I hooked up with a local named Harris who had a family horse ranch in Sandy Bay, only 5 minutes from West End. Harris took me to his ranch where I found 3 types of psilocybe mushrooms growing. During the rainy season they have an abundance of cubensis, panaeolus Cyanescens and one other unidentified less potent species. The cubensis the locals call "purple ringers" and are widely shared with the tourist. Harris told me that during rainy season when plenty of mushrooms are around, the locals make a mushroom tea and it's sold at some of the beach front bars. He said for a decade the mushroom tea was very popular, but then the police started cracking down on it and it is done more secretly now. This was in 2007. Harris told me he can usually find psilocybe mushrooms all year around so if you happen to visit Roatan, ask around for Harris. Many people seem to know him in the West End area so he is not hard to find. Thanks to Harris I got a chance to eat some delightful cubensis and enjoy a nice experience walking down the beach from West End to West Bay.

Roatan has a history of pirates hiding out on the islands between 1550-1700. You have to wonder how many of these pirates were brave enough to eat these sacred mushrooms. Without a doubt the Mayan culture that once thrived in Honduras used these sacred mushrooms. Miniature mushroom stones, 2200 years of age, have been found in archaeological sites in Honduras. There is a good article on Erowid about the Mayan mushrooms stones here.  Although these days the mainland of Honduras has become very dangerous do to the Mexican drug cartels moving in and I would not venture to the mainland to visit the Mayan temples. However my friends on Roatan tell me it's still safe there as criminals tend to stay away from islands as they have nowhere to run from the law.

Below I posted a few pictures of the original mushrooms I found in Roatan. Since it was the non rainy season, the specimens are not large in nature, but strong and vigorous. In fact some of our growers in Jamaica said this strain is on the top 10 best cubensis! 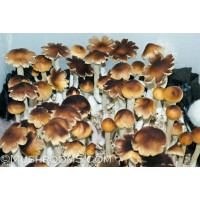 The Puerto Rico cubensis spores originated from mushrooms found on the Northeast side of the island ..